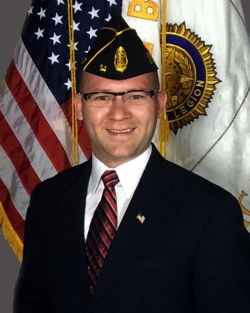 Rusty S.E. Ridley serves as chairman of the board for Wyoming Boys' State, Department of Wyoming, The American Legion. He was a delegate in 2001 and has since been a military advisor, senior military advisor and director for the program. He has been with Boys' State for 12 years and is a current member of Husted-Pendleton Post 14 in Laramie.

Captain Rusty S.E. Ridley serves as an Executive Officer for the 153rd Airlift Wing, Wyoming Air National Guard in Cheyenne, Wyo. The 153rd Airlift Wing supports the State of Wyoming, the Air National Guard and the United States Air Force. The Wing is equipped with eight, C-130H aircraft, and consists of more than 1,200 personnel across 20 squadrons. The 153rd supports state and national interests through peacetime and combat airlift missions throughout the world. The Wing also has capabilities for aerial firefighting (Modular Airborne Fire Fighting System), an aeromedical evacuation unit, a command and control mission and an air traffic control unit.

Captain Ridley began his career October 2001 when he enlisted in the Wyoming Air National Guard as a Chaplain Assistant. He attended Basic Military Training where he was an honor graduate. He later attended the Chaplain Assistant Apprentice Course and was a top graduate. After graduating from Nebraska's York College in 2007, he was commissioned a year later after completing the Academy of Military Science. He is a graduate of the Defense Information School's Public Affairs Qualification Course at Ft. Meade, Md.